Eating crow, tracting, and a baptism 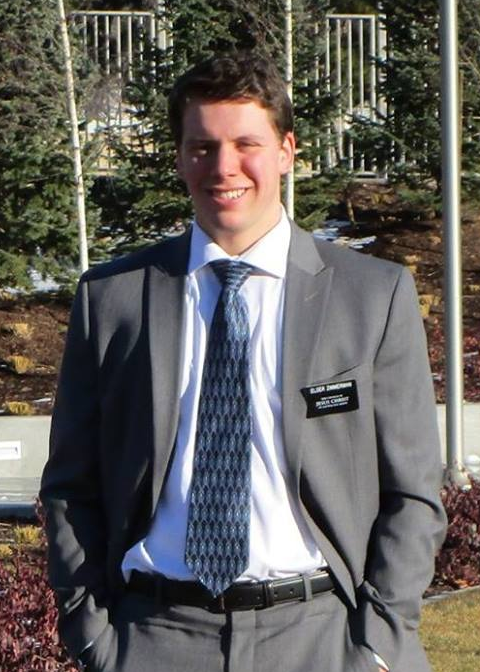 Eating crow, tracting, and a baptism

Knock, knock....... Who's there?..... The Missionaries
This last week has been a really good one, if alternating between the speed of light and a cool School Zone 20.

Monday after P day we had one more meeting with one of the boys in the ward who left this morning for the MTC. We taught the restoration and had a really cool question and answer. I’m really excited for him. Then we went and taught D-- and he had his baptismal interview which he passed with flying colors. We taught about the Priesthood and how it can bless our lives through covenants and through service opportunities.

Tuesday was supposed to be a snow-pocalypse and as such almost all our lessons and members backed out on us. We had to continue to do "12 week" which is the bane of my existence; in reality it is to help continue to refine MTC skills in the field and build better missionaries. That said when we spend an extra half hour in our apartment to do it, I am convinced I hear "Satan laughing in delight" somewhere in the distance for the time spent not interacting with people. All is well though.

As I prepared for the day I dawned the "snow trax” that enable a wearer to walk on ice and snow with confidence and poise. " You don't need those," my companion said. And that was my mistake. I didn't wear them. I trusted him, figuring that he had weathered two New England winters already. So off I go for the day, my pride about to take me to a fall as I smirked to my companion and said "I don't fall." Fast forward to 3 hours later when walking down a driveway of a Media Referral back to the car, when I discover a half inch of slick ice under an inch of powdery fluff. I step more carefully then involuntarily enter a surf and begin to surf down the hill. This was all fine and good until my left foot found pavement and my right kept going. Then I had to eat crow; " I don't fall,” I had smirked. My balance was put to the test and there I went onto my head and rolling and sliding down another 25 feet of hill. The hit wasn't hard, just a small bump accompanied by a cut above my left eye.

We had dinner with a member that night at Wendy’s, with her mother’s church. There were about 30 people who looked as if they qualified for the senior discount over again. It was positive I think, but all in all uncomfortable until we shared a few Christ centered scriptures from the Book of Mormon.

Wednesday, we worked in Bristol (city about 35 minutes south of our ward building and 45 south of our apartment). We continued to track down old media referrals and tract a lot of inactive members and their neighbors. At one point the hair that escaped my hat turned into an icicle in the freezing rain. Thankfully despite the cold and wet we stayed warm and dry. We ate dinner with 3 single fathers who have come together to form a support group. It was cool to see the diversity and community. Also, the wings; the wings were very, very good.

Thursday, we met with D-- again and taught about church callings and service. He really liked the ideas about how the community pitched in and I continued to realize how unique the organization of the church is. We taught our 10-year-old investigator and helped her see why the Book of Mormon was important. She came to church and committed to pray to know if the Book of Mormon was true as she reads it. After dinner we did some more knocking and passed out 6 BOMS in about an hour tracking as well as picking up a few more potential investigators.

Friday, we were stood up for 2 teaching appointments and we knocked about 60 doors to finish off a block of condominiums. The people were friendly, when available, and the weather was sizzling 40 degrees and cloudy. We had dinner with probably my favorite members, the B’s and their two daughters L-- and G-- ages 15 months and 3 years respectively. The father comes with us on 4 teaching appointments a week, generally as last-minute backup and the wife was kicked out of a grocery store for giving out too many pass-along cards. That says most of what needs to be said about these good folks. Their daughters are so sweet. The younger, L--, is very shy and smiles and looks down when I catch her looking at me. She will come trotting into a room at full speed, see me and turn 180 degrees instantly while she smiles.

Saturday was filled with one thing really, the baptism of D--. Though we finished filling the font with buckets, the water was warm and the room fogged up on us. The ward mission leader is awesome and really did a nice job in the programs and refreshments. The talks were given by my companion and a close friend of D—‘s. D-- has been attending institute for 3 months with perfect attendance and meeting with the missionaries for only 7 weeks. Needless to say, his commitment and self-directed nature have helped him enter the gate to the path to exaltation. He was baptized by his friend and fellow-shipper S--. The rest of the day (after a trip to Taco Bell) was very hard to stay focused so we just knocked doors and picked up a few really solid investigators. It’s incredible how exhausting spiritual experiences can be.

Sunday's Sacrament meeting was a full one. A farewell talk, a baby blessing, a moving member’s talk and D--'s confirmation. It’s incredible the joy that saving ordinances bring into the lives of those who are prepared for them. The farewell talk had a very humble ‘help my unbelief’ tone to it and it was really cool to see a young man who understood that his beliefs and a little action would build his faith. I found out a few weeks ago how small of a world it is, and was reminded on Sunday when a member of the ward who worked for the same small roofing outfit out of north Idaho that I worked for for most of 3 years. This brother and I at the end of sacrament turned to each other and said, " that water spot is new, and it’s getting bigger". Hopefully the FM guys get to it soon because it’s on a seam and above an organ. Sunday after church was a Linger Longer and we ran off after to give a blessing to a sick investigator. By the time we got home we did the studies we were unable to do before going to ward council and we went to bed.

All in all, this week we were successful and we have a lot of return appointments and high hopes for the weeks ahead.