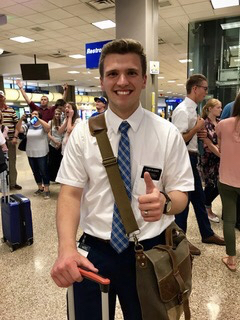 Honestly right now I am pumped to do missionary work. Which is weird because I am so tired all the time and I sometimes probably only get half of my calorie intake for the day and on some of the other days get double. But that's missionary work for ya. Its awesome. Nothing can stop the work of the Lord.

So this week was just "phenomenal" (a word my Mission President loves to use repeatedly and its so funny when he says it) We really just got to work and found a bunch of people that seem so ready to receive the gospel. Yesterday, we found one family, the Macalinos, that lived at the dirty end of one of the streets by sort of a swamp. The family cuts coconuts for a living, harvesting the water and the meat for making food, soap, and other products. They have 4 children and are very poor. They have a small, cinder-block, house that they share with their extended family. Many of the adults have got to work abroad so they do a lot in taking care of the 20ish other children that were left behind. We found them and had taught the restoration of the Gospel to them and their family. At the end of the lesson, the father pretty much asked us if he and his whole family could be baptized so that they can all go to heaven together. I was like YESSSSSS!!!

So that might be why I'm still pumped to do missionary work haha. I had been praying to find a family like this one for 2 weeks. And boy does God answer prayers!

A story is told that during the bombing of a city in World War II, a large statue of Jesus Christ was severely damaged. When the townspeople found the statue among the rubble, they mourned because it had been a beloved symbol of their faith and of God’s presence in their lives.
Experts were able to repair most of the statue, but its hands had been damaged so severely that they could not be restored. Some suggested that they hire a sculptor to make new hands, but others wanted to leave it as it was—a permanent reminder of the tragedy of war. Ultimately, the statue remained without hands. However, the people of the city added on the base of the statue of Jesus Christ a sign with these words: “You are my hands.”

There is a profound lesson in this story. When I think of the Savior, I often picture Him with hands outstretched, reaching out to comfort, heal, bless, and love. And He always talked with, never down to, people. He loved the humble and the meek and walked among them, ministering to them and offering hope and salvation.

I know that as we try to "be His Hands" we will be able to experience a taste of the love that Jesus Christ has for us. He truly gave His life for us all, and rose again for us all, that we may all come unto Him. May we give our all to whatever callings the Lord has entrusted to us, lifting others, that we may all rise together, becoming as He is.