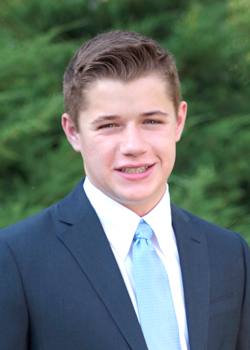 This week is gonna be my 19th birthday so that's kind of weird...I'm not really a kid anymore, but still young at heart so that's cool.

So this week's been pretty good. It's the first week of the training so it's always a little different. So you've gotta get used to the new companion, sometimes the new sector, but for me I stayed here, in Curico in the Alameda ward. My old companion Elder Heap went home to Arizona and I got my new companion Tuesday, which was Elder Guadligria (sp?) from Uraguay. So he got here on Tuesday in the morning and I was in the bus terminal all day to make sure all the missionaries got to their zones where they need to be, because that's one of the Zone Leader's responsibilities down here. So he got here on Tuesday and we finally got back to the house and got settled in here and did a lot of cleaning...it wasn't SUPER messy but it could've probably been a little tidier, the house, but that was good. We got everything all organized. We got some old bunk beds nobody was using taken down and got a lot of space opened up so that was kind of cool.

On Wednesday we had a meeting with the zone, something a little different we are starting with this change...to set goals and plans for the transfer. We decided, "What are achievable goals we can set for the zone for this change?" and we had them do the same thing in districts. Then on Thursday we took those goals and plans we had made to leadership council in Rancagua...which was really REALLY good this transfer! The last time I went to the leadership council...I mean it wasn't bad but... I was having a little trouble keeping my eyes open, I'll be honest. But this one was fantastic. The spirit was incredible and it was really more efficient than last time. So we were there all day in Rancagua on Thursday and when we got back we had time to do our studies and that was it.

On Friday, everything was...let's see, did anything even happen on Friday?...oh yeah...on Friday we went to a little pueblo, a little town, outside of Curico called Serviento (sp?) which is a part of our sector. We have two little towns outside of Curico that are a part of our sector..sorry for my English...I don't get a lot of practice. So while we were out there we found a small family of 3, it was an old grandpa, his daughter and his granddaughter and they were SUPER SUPER receptive, really nice, they had a couple questions, they participated a little bit but really the cool part about that lesson apart from finding a family, was the spirit that came in when we shared the first vision. You know, I just ...you go to recite the actual words from the first vision, which we don't always do, but I felt like we should do it. And the spirit just filled the room so quick and so strong, it was really awesome. So that was a cool experience.

On Saturday morning I gave my first baptismal interview. One of the sectors in our zone, one of the district leaders, had a baptism on Saturday night so I got to do the interview on Saturday morning...which was cool, which was different, something I hadn't done before. So kind of an older lady named Margarita. She's kind of an old catholic lady, one of the ones that always tells us to get out, she doesn't want to hear anything, she'll never change. And so I don't know that I ever thought I'd ever see one of those get baptized, but to be able to give her a baptismal interview was kind of cool for me.

And then, yesterday was kind of a rougher day. None of our investigators made it out to sacrament meeting even though we had about 6 who were committed to go, and 5 of which we had committed to go the day before, so we thought we were set, we thought we were going to have a lot of people come in...but they all bailed on us. But that's all right. It's kind of the stuff that happens. You can't force the people to accept the gospel it's something that comes bit by bit. It was ok.

Also this week we found a bunch of Columbians who were visiting, who were here for work, who actually got tricked into coming down here and now they're getting paid less than they were promised. It's actually something that happens a lot with the Columbians, with the Hatians here. But we started teaching them and they're pretty receptive as well. They started coming to church about twice...to our ward...but they sometimes go to another ward because they sometimes send a member with a van to steal them. I don't know what's up with that because they live in the boundaries of our ward, but that's just more interesting stuff that happens.

So it's kind of weird to be doing this whole talking/recording thing. But I thought it'd be something different, kind of cool. I'm kind of running out of time here, but I just wanna let you guys all know that I love you, that I'm happy out here, that I enjoy spreading the gospel. It's all about getting lost in the work. I want to let you all know that I know this church is true and that Christ knows us.

I hope you all have a great week!