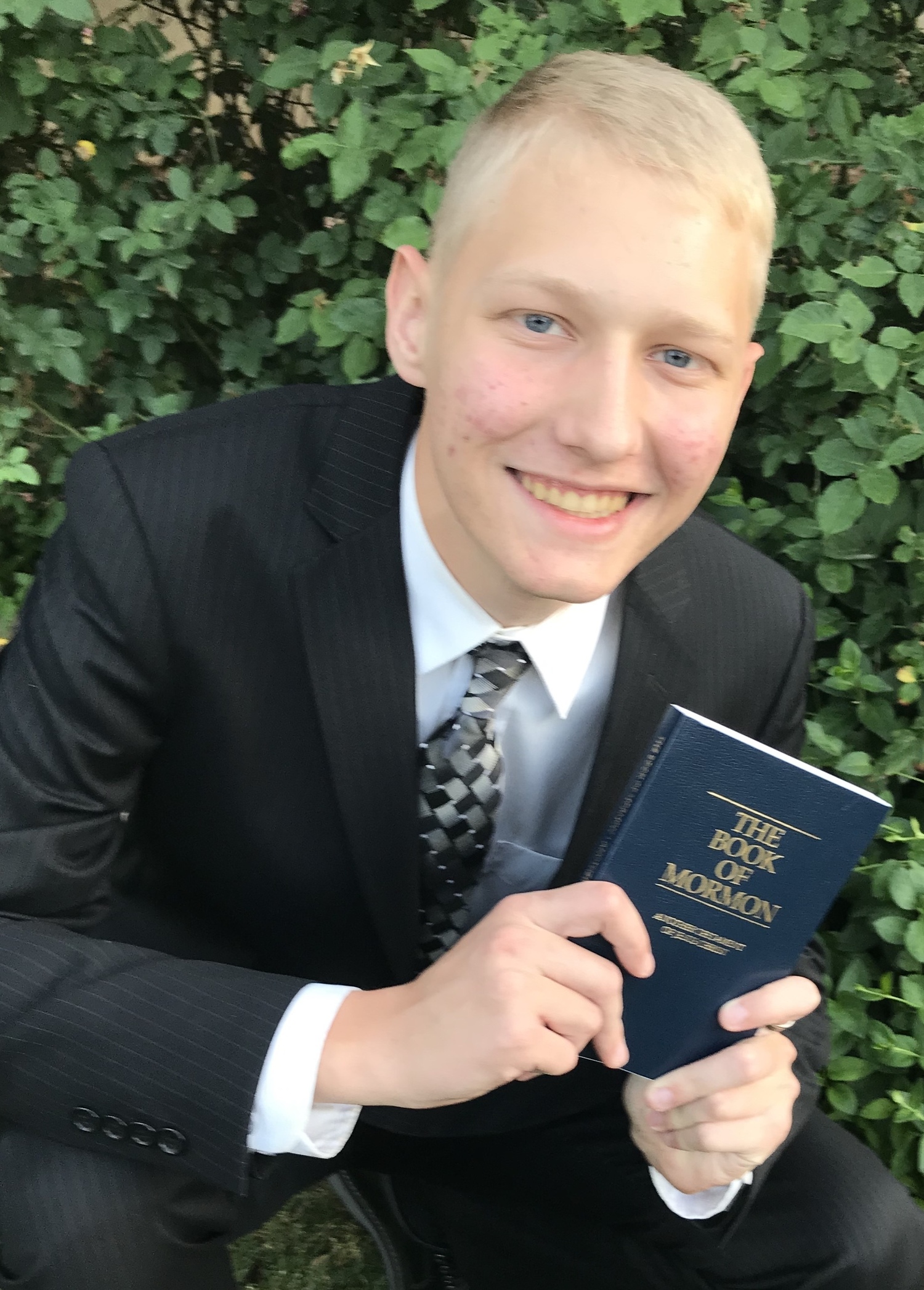 Hey guys! I hope you are all doing awesome. Here has been good, not too crazy. It's getting cold here, which is both good and bad lol. I get to put the thermostat on 73°F every morning, and my companion can't really complain, but on the other hand I have been told it starts snowing early November... I am excited to see snow (and wear a scarf), but I have absolutely no idea how I am supposed to do missionary work in the snow, lol.

Lunes (Monday): P-day was good, we just need to find better things to do than sleep and call our parents, lol. After P-day we went to go talk to Tony#2 (He's the one where we butchered our first contact). He answered the door! He had a lot of questions, so talked to him about them. It actually went really good! His schedule is very strange, so he said "Just show up whenever, I know God will make it work for us to talk", lol.

Martes (Tuesday): We had exchanges with Elder Monteroso and Elder Julian again, but this time Julian and I were in their area. I actually showed up on the plane with him, so we were a greeny squad for a couple hours. Elder Ross says "When greenies speak miracles happen". I am not going to deny that, but he usually says it when he wants me to do a door contact by myself, lol. My competitive nature really wanted to out perform the more experienced Elders, so we went to work with broken Spanish and Books of Mormon. What were the final results? 2 new people: 0 new people. We killed them... there isn't even a number to describe the ratio of 2:0. It was a good day lol.

Miércoles (Wednesday): So this was kind of a funny experience. We were going to this house that we talk to quite a bit, but they're really busy and said they would text us when they had time (which is equivalent to someone friend zoning you in missionary work). So we knocked and her husband answered (he was the least interested in our message before), and we start talking to him and he says "My wife is in the bathroom right now, but your could teach us right now." lol. So we taught my third or fourth lesson with non-members. It was good, they said they'd read the Book of Mormon, and we have another lesson next Sunday.

Jueves (Thursday): We talked to Tony#1 finally! We had the entire lesson prepared to put him on date, but he didn't have a lot of time, so we didn't get to the lesson. He has an extremely difficult life situation, so he doesn't know when he'll be able to talk to us. He is awesome, we just need to see if we can get some stuff worked out. Pray for Tony#1 to be able to have a good opportunity to receive the gospel, please.

Viernes (Friday): We had Zone Conference! It was awesome, I learned a lot! We talked about how to use the power of the Book of Mormon in our teachings. We also talked a lot about the "heart beat" method which is the way we should do contacts and lessons. It was a good Zone Conferences. It's fun to see all of the other Elders in different areas. When you get 8-10 Elders in one van, that is the pinnacle of a good time, lol.

Sábado (Saturday): General Conference! It was so awesome to listen to our
Prophet! There were a few talks I liked, but I will put them in my spiritual message part. We found a new person after conference and we talked to a lady about her religion for like 30 mins. She was nice, but she had had a bad experience with the missionaries a while ago, so we were trying to fix that a little bit.

Domingo (Sunday): Conference again! It was kinda funny because that morning I was reading about the Gathering of Israel and I found that Israel meant "let God prevail" in Hebrew. I was like "Huhh, that's cool. I feel like there might be a good lesson here or something." The Prophet beat me to it, haha. Make sure you all are doing what thr Prophet asked. Look for the promises to the tribes of Israel in the scriptures and then in your lives because God will give us those blessings in these days. If you don't, I will be disappointed, lol :P.

Spiritual thought: For my spiritual thought I want to talk about one of my favorite talks in Conference. It was the 2nd talk in the Saturday morning session, by Scott D. Whiting. He talked about becoming more like our Savior by developing Christ-like attributes. I really wish I tried harder to develop Christ-like attributes in high school, lol. Sister Hales put a lot of emphasis on it, but I guess I didn't grasp all of the effort needed, haha. Scott D. Whiting says there are 4 steps to acquiring these attributes.

1st "Have the desire to become like him." You can't just become like him by accident, we're mortals and these attributes aren't easy to receive because of our flaws.

2nd "Ask which gift you need." There are a lot of gifts, but sometimes it can be difficult to see the one we need the most. A few ways he says we should try to find out which we need is by asking trusted people or even better, ask Heavenly Father in prayer. He knows what we need to do to reach our divine potential. As his children, He wants to help us.

3rd. "Repent". Repentance is a huge part of acquiring these gifts. As mortals with flaws, we can't become more like Christ by ourselves. Many think of the Atonement as just a way to repent of our sins, which is true, but there is so much more power that is not being understood. The Atonement literally has the power to change the desires of our hearts and can permanently change our nature. After the end of King Benjamin's discourse, at the beginning of the Book of Mosiah, the people (through the Atonement of Jesus Christ) had "wrought a mighty change in us, or in our hearts, that we have no more disposition to do evil, but to do good continually." (Mosiah 5:2)

4th. "Keenly focus on that attribute". Now, this one can be quite difficult (not saying the other steps aren't lol). We need to ask, in prayer, to receive these changes in our hearts and keep trying our best. We need to pick the one gift that we need to work on, and actually try to emulate the Savior. This is where your faith will be tried. You will mess up on your journey to receive these gifts, but through step #3, any time you fall backward, repentance can "wrought a mighty change in [your] heart". Don't give up after messing up. None of us are perfect or will receive perfection in this life, but if we have faith that through Christ these attributes are actually acquirable we can receive them. Receiving these gifts occur over a lifetime, so don't get discouraged. Quitting is not an attribute of Jesus Christ, lol.

Funny stuff:
1. Usually missionaries are extremely excited when they get a temple near their mission, but it's Utah lol.
2. I probably shouldn't tell people that I played chess in high school because then nobody will play with me, haha.
3. Elder Julian is able to speak Spanish better than he can understand, and I am the opposite, so we work pretty well lol.
4. We met a member who served his mission in Hungary and who was going to Rick's College when it was changed to BYU Idaho, so that was interesting.
5. We will probably be getting new boundaries for our areas, so we met up to talk about it. It was hard to take seriously after we started writing down where all the good restaurants were lol.
6. I almost forgot, I am at 5 languages for The Book of Mormon - English, Spanish, French, Portuguese, and Chinese.

Pictures:
Picture 1: On exchanges with Julian we knocked on a door that just had a hotdog on its porch, so that was funny.
Picture 2: Have you guys seen this emoji!? It's an squid waving! It's Gold. Elder Ross didn't like him a ton so I cropped the squid over his face in some of my pictures of him.
Picture 3: A snake my brother sent me last P-day. The snake is pretty silly if you couldn't tell, haha.