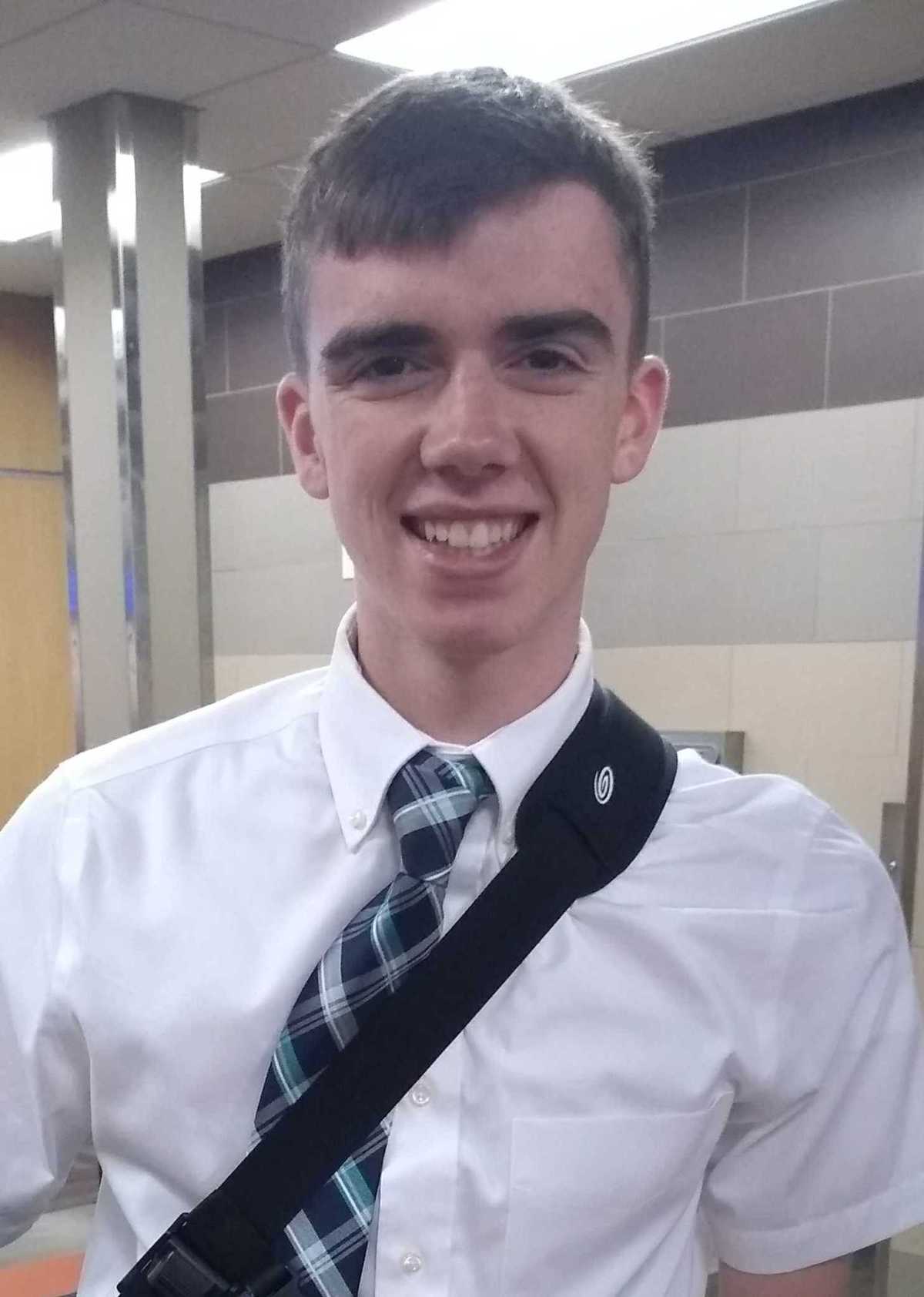 This week had been really great! we are teaching so many people, and have a TON of new potential. I am so grateful to be another transfer in paranaque 2nd ward and hope for a lot more.

This week, we spent our P-day at the mall of asia. At one point we decided to test and rate the couches at one shop. It was a really nice time after so long without a couch. We each had our individual favorites, but decided on a couch named "the hannah
montana couch" because it was the best of both worlds. It was a fun way to spend p day. We then ate mexican food and a little cinnabon too. It was super fun.

That night I said goodbye to my dear friend Elder Armadillo on the phone. Im super proud of him for the way he finished his mission and learned an awful lot from him. Im gonna miss that guy but Im so grateful for all the time we had together.

The next day we had a zone meeting where elder O'conner and Sister Rebuya said their goodbyes and said their last testimonies to us. It feels so weird to watch your close friends leave the mission but Im so grateful for the relationships we all had together.
Its cool too to know that these relationships we have will be meaningful to each of us forever. Its cool that through technology we can all keep in touch, though thousands of miles away.

This week has been packed full of blessings as far as teaching goes. One of the best is a referral of the tanola family. His name is Kyle. He is 16 years old and is a SUPER nice kid. Weve taught him 2 times and he readily accepted a baptismal date for
april 6. he came to church this week with the tanola family and now is super tight with all the young men in the ward. They are super good at fellowshipping. Such a great group of young men. brother tanola's son just got back from a mission on wednesday
too! we were invited to his homecoming lunch. He is super nice and really wants to work with us. He talked to me about how hard the interview with the stake president was and how he didnt want to take off the tag. Missions are the absolute best and I know
that will be a hard day for sure. He also told us to come over whenever we want to eat. We are going to work with him on thursday, and he insisted that we come to his house first and eat. Its so funny how much the people here treasure the missionaries.
at his homecoming lunch, they made us go before everyone else to get our food and then kept offering more and more. Seriously filipinos are the best people ever. most of the time, adrian hung out with us and talked about missions. You could feel his love
for the work and im really excited to get to work with him. What a great family. I am super excited for kyle (and hopefully we are gonna start teaching his sister too!) and overall feel blessed.

Another new blessing is the referral of sister cacayurin. His name is michael medina. He is her grandson. we have met with him 3 times and he accepted a date for march 30th. We are super excited for him. He really digs into what he reads and expounds
on it to us. Sister cacayurin always laughs and says that he is going to be a sunday school teacher someday. He is seriously such a great guy. Love that guy. We are excited for him too and cant wait to teach him more.

Mike clark is one of the americans we have been teaching and he came to church today! He was the one who said that every time he prayed, the missionaries would appear. He listened to our message and accepted a baptismal date as well. Teaching in english
is SO HARD. i struggle with it. We start talking and i just slip into tagalog. Especially sharing the first vision in english. That is SUPER hard. Im way more used to it in tagalog. Its kinda fun getting to teach in english and to let Elder Carroll take
a big lead in the teaching. He is making such great progress. His language is actually too. He is so much fun to work with and im blessed with another great companion.

Andrea abando. I love her and her husband. They are both SUPER nice. her husband is a member and they have a 2 week old daughter. Every time we go over to her house, they feed us a ton and then we have a great discussion about the doctrine. She is
super smart and overall such a sweet person. She is super excited for her baptism and we are goaling the 6th of april. Her other son jacks is adorable. He is just a little guy but he loves it when we come over. Super cute. I love that family. Her husband
nick is histerical. his laugh is hilarious and its really fun to talk with the two of them. They totally tease each other and its super cute. Love them both. I think that nick is going to baptize his wife which is really cool. I cant wait.

Jean sumabat. The referall from salt lake. she is doing really good! today was supposed to be her 2nd time at church but she got on the wrong jeep and wound up at the airport. Poor lady didnt have any load on her phone so she couldnt even call us for
directions. next time, she said that she will make sure to take the right one. We all had a good laugh about it. She is super excited for her baptism which will either be on the 23rd or 30th of march. She also gave us a referal. her neighbor happens to
be a part member family. They are super interested and want to start going to church. Especially sister jenny. We are super excited to start teaching them too!

jerry. Jerry is such a great guy. His wife is back from the province and we can see noticible changes in him every visit. He has still yet to accept a date for baptism but we are pressing forward. I felt impressed that he would respond well with teaching
out of the bible, so we started using bible verses that prophesied of the apostacy and restoration of the gospel. There are actually a lot of really good verses about that in the bible and we could see he took really well to them. We are keeping him in our
prayers and hoping that he receives the testimony that he is searching for. Its super funny. His wife came back and said, "okay elders lets hear the message", and jerry turned to her and whispered "honey i always like to feed them before we start" super
nice guy. Now every time we teach he feeds us AND gives us a take home of what he served us. He is seriously the best. Love that family.

Jake paraiso. jake is such a wonderful guy. He is one of my favorites ive ever met. This week, we went with them to the temple. It was super fun to go as the four of us except apparently it is closed for rennovation. We were allowed to take pictures
for about 10 mins only, but only in one spot. So sad!! its okay, we will go again for sure. They are seriously the best though. im so excited for their wedding and baptism of jake next month.

I had an interesting experience this week. We were on our way to a scheduled appointment with jerry when i felt a distinct prompting. "dont go to teach him yet" no specific as to why or what i was supposed to do instead. I voiced my feelings to my
companion and we decided to backtrack a few steps toward the main road. As we stood in the main road I asked heavenly father, "please show me who thou would have me talk to.", as i thought these words i heard "elders!" it was a friend of jimmy's. He came
up to us and talked to us for a little while. We were able to share a verse with him and he expressed his desire to go to church. It was super cool to see the lord work through promptings and answer prayers. This gospel is so true!!

One of the things Ive been pondering this week is advice my dad gave to me. he said that if he could go back he would 1) stress less about numbers and 2) share more. After hearing this, i made it my goal to apply my dad's advice. I started sharing more.
verses to anyone who would listen. I noticed that i felt happier and felt like i was helping more people. As i thought about my dad's advice too, I thought about how nfl quarterbacking is related to missionary success. As i was thinking, I realized that
2 stats make a really good quarterback. Touchdowns and yards thrown. Peyton manning once held the record for both, and both seemed like equally admirable acheivments. When compared to missionary work, I would think that the touchdowns equivalate to baptisms.
We all hope for thechance to bring many souls unto christ through baptsim, but need to realize that there is so much more than that. Great missionaries throw a lot of yards. Throwing yards involves giving many people the opportunity to hear the gospel, regardless
of whether they accept it at the present time. It involves opening our mouths at all times and being fearless in our efforts to proclaim the restored gospel. one of our new mission standards is to open our mouthes and share to random people 30 times a day.
Though maybe a challenging goal, ive noticed an increase in spiritual power as we truly try to invite ALL to come unto christ. Through these efforts, i can truly see our mission starting to throw a lot more yards. I am grateful for that new revelation and
hope to get better at it every week of my mission. One thing about missionary quarterbacking is that god doesnt intend every throw to be a touchdown. We are sent to some families to give them a handoff or a short pass. Not all are ready for the end zone.
The important thing to remember is that their time WILL come and that we were blessed to help them progress. If the nfl greats approached football with a desire to only throw touchdown passes, they would quickly find their efforts dissapointing and discouraging.
Instead, they approach the game with the patience. They approach each play as an opportunity to gain forward yardage. As we wrok as missionaries, I know that we will be blessed as we work to throw more yards, and leave the timing of touchdowns to the lord.
One of my favorite verses about the sons of mosiah is mosaih 28:3. It says, "now they were desirous that salvation should be declared to every creature for they could not bear that any human soul should perish". These men truly understood what it means to
be missionaries. And through their individual efforts, they were able to effect the lives of thousands. I have a testimony of the work to which i am called. i truly love it. I truly do. I have never felt anything so satisfying.

I will work my hardest to throw a lot of passes, and leave the game in the lord's hands