Jan. 1, 2012: Est. population, 12,799,000; Members, 1,046; Branches 5; Districts, 1;
Percent LDS, .005, or one in 19,782; Africa Southeast Area. Desenet News 2013 Chunch News Almanac 421
The Church in Angola became established in three ways: Angolans in Angola somehow obtained Church literature and made contact with Church headquarters; Angolans living abroad were baptized and returned to their country; and American Latter-day Saints working in Angola introduced the gospel to a few of the local population.
In the mid-1970s and throughout the 1980s, people living in Angola came across Church literature and were converted. They wrote the International Mission asking that the Church come to their country. Among these was Dompetelo Paulo Rossi who was converted by reading Joseph Smith's Testimony.
Angolans living abroad, particularly in Portugal, France and the German Democratic Republic, [East Germany) in the 1980s met missionaries, were taught the gospel and baptized. Olivio Gomes Manuel joined the Church in Portugal where he was playing on the national basketball team. After joining the Church, he felt impressed to serve a mission, though it meant sacrificing a lucrative basketball career. He served in the Portugal Lisbon South Mission from1990-1992, perhaps the first Angolan native to be a full-time missionary.
Wolfgang Paul, president of the German Democratic Republic Dresden Mission, reported that shortly after his arrival in March 1989, missionaries began to teach and baptize Africans, including Angolans. These Africans had gone to East Germany to study or to work as interns with East German companies. From May to December 1989, approximately 25 African men were baptized. Following the unification of the two German nations, many Angolans return to their homes because the agreement with the previous government was not accepted by the Federal Republic of Germany.
Once President Paul knew that their return was inevitable, all were called together in the spring of 1991 for a training seminar to prepare them to return to their homelands where there were no branches.They were taught the principles of the gospel, especially about the power of the priesthood. They were made aware which authority they did and did not hold, since they were all bearers of the Aaronic Priesthood. Their names were then sent to the Africa Area office, where they were placed in a file for future contacts when the Church was established in Angola.
In the mid-1980s, A. Edward Carlson Jr., a Church member from Utah, was working in Angola. He passed out 60 copies of the Book of Mormon. Some who received the gospel formed small study groups. Carlson requested permission to baptize a few of these people, but was told to wait because the government of Angola prevented the free exercise of religion.
Elder Earl C. Tingey, a Seventy and counselor in the Africa Area Presidency, flew to the city of Luandain March1992 to lay foundation for establishment of Church in Angola. Elder Tingey was the first General Authority to visit that country. Upon his arrival, he advertised his visit in a newspaper and on the radio, inviting any Latter-day Saints or interested fnends to attend Sunday worship services. Approximately 40 attended the Sunday meeting. Papers for registering the Church were filed in August 1992. On 15 October 1992, the registration of the Church in Angola was published in the official paper Diario Da Republica.
Nearly four years later, in June1996, ElderJ.Richard Clarke, president of the Africa Area, and his counselor. ElderJames 0.Mason, visited Luande to assess the activities of the Church members who had been meeting there. Elders Clarke and Mason met with the U.S. Ambassador and Dr. Francisco A. Correira Losboa Santos, the director of the National Institute of Religious Affairs. Sensing the faith and testimonies of the Angolan Latter-day Saints, Elder Clarke organized the Luanda Branch on 9 June, the first Portuguese-speaking branch organized in Africa. Vuamina Tshaka Mbenza, who had been baptized and given the Melchizedek Priesthood in France ,was called as branch president. The branch was under direct supervision of the Area Presidency in Johannesburg, South Africa. The creation of the branch was no indication that the Church was ready to start missionary work in Angola. The country was still in the midst of a civilwar.
Out breaks of war in the late 1990s prevented contact between the Area Presidency and the Angolan Church members for nearly two years. Finally, in May1999, Elder Ray H. Wood ofthe Africa Southeast Area Presidency was able to visit and preside at branch a conference in Luanda. At that time, the branch had 107 members with 60 percent attendance at meetings. A baptism had occurred just three weeks prior to Elder Wood's visit. The conference was attended by 150 people.
There were no missionaries in Angola in 2000. In 2001 there was also a small group of foreign Latter-day Saints working for oil companies meeting in Cabinda, Angola.
In 2002, there were 563 members, and 596 in 2003.
On Oct. 20,2010, Elder D. Todd Christofferson gathered with a small group of members under a several hundred year old baobab tree situated on a hill overlooking the Atlantic Ocean to one side and the capital city of Luanda to the other to bless the country and open the land to missionary work. In the prayer he called to mind the approximately 250 hundreds years of slave trade and the 25-year-old civil war that had ended a decade earlier. He blessed the members and missionaries, though small in number, to be shining lights and guidance to the nation. 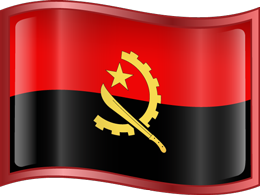