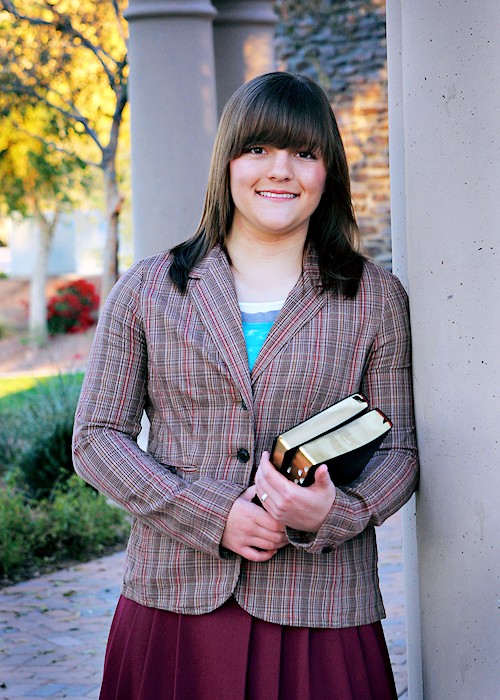 Okay this is going to be pretty disjointed because i just took notes throughout the week of things I wanted to say. So here you go.

- Sam, Ally and Ammon- are you still alive?

First of all, my companions are awesome. Really. I know we're all together for a reason and I'm starting to get an idea of what that is. Hna Macey is 21, from Logan, and goes to USU. We hit it off right away because we're both so funny and awesome and... jk. But seriously. We mesh so well and have similar studying and teaching styles. Not only do I love her, but I also like her a whole ton. There is a difference... As for Hna Stewart, I love her too. She's a great companion and I know there's a lot I can learn from her. She's 22 and graduated from UVU with her RN.
Sometimes this tripanionship can get pretty touch because we all have separate relationships with each other - so trying to plan a lesson is always pretty tough when there are so many opinions and factors in play. But I guess you don't need all the details. Just say a prayer that we'll be able to figure it out and keep the Spirit in our companionship.

- Okay, that was from Wednesday. We had an awful lesson, pretty much nothing was planned because we didn't have the Spirit and couldn't get along. But yesterday we all just worked really hard on having charity and listening to each other, and it was the best lesson we ever had. Claudio's getting baptized!! I'll write more on that later today. But just remember - the Spirit converts people. I'm here to invite others to come to Christ, not to convince them.

- The devotionals here are awesome. We had Elder Aitakais and his wife from the 70 speak to us on Tuesday, and it was the best talk I've ever heard. It was all about D&C 138 and choosing now which kingdom we want to inherit.

- To Michon and Ricky - we watched an MTC address from Elder Holland where he said his wife "has an Avon lady more persistent than most missionaries, and she was selling mascara for Pete's sake! We're dealing with the salvation of souls here! Can you get fired up about that?" Just imagine him yelling that from the pulpit. It was pretty intense.

- At mission conference on Sunday President Nally had two ESL missionaries get up and bear their testimonies with an interpreter. That was the strongest I've felt the Spirit in the MTC. It doesn't matter what you say - the Spirit doesn't have any language barriers. That was helpful for me to remember while trying to learn Spanish.

- My ZRT Hermano Busath is exactly like Sweets from "Bones." But that just might be more withdrawals on my part....

- President Nally said in an address that as missionaries we always need to be dignified, and it took me a few days to remember what movie "Dignity... Always dignity" is from. ("Singing in the Rain," fyi)

- Also someone said we are the help of the helpless, and I just pictured Lucy in a marching band singing "We are the friends of the friendless, yes we are, yes we are!"
- Anyways.
- Hna Stewart is pretty much a 22 year old version of Jenny THOMsen. I love it.

The MC6 news sounds pretty sweet. I hope that new guy works out so you don't have to be gone so much. But I guess that doesn't really affect me so whatevs. jk. But seriously. And if you go a single day in the next 79 weeks without tears running down that handsome face of yours, I'll hand-write you a 10 page Spanish letter. But I'm not too worried about that....

- Benjamin - you are now my favorite youngest brother. Except you can't go to Brazil because Portuguese is the lesser Spanish. So....

- G&G A - leaving in the middle of the night? Not cool. If it had been for a good reason like vacating my room asap that might have flown. But not anymore.

- I saw Angelina (Montenegro - a cousin) at the temple last Sunday and she took a picture, so you should get that. And I saw Tydin (Jarman, an elder from our ward) - he said he's good.

- Ricky - I know I was hating on the temple walk in the car, but I needed it so bad. I thought I was going to go crazy if I didn't get a change of scenery, especially since I never leave a 100 yard radius in la CCM. So Cristina - love the temple walk.

- Teen - Mom doesn't need bum-bling shorts to be hott stuff. With a capital hhcchhaaa... And I really hope sister missionaries in Argentina can carry pistoles. And I can now focus 100% because I know who was eating mayonnaise. JK. But thanks. And "I'd say keep it on the DL but since you're so out of the loop I won't even bother"? Really? I can't wait until you get here and see just what it's like.

- I had service on Tuesday with my best friend Annie and the good thing is that all the sisters in my district know all the words to all the "Les Mis" songs. So I think I'll be able to get through the next 5 weeks.

- Familia - The PMG study sounds awesome. You really need to understand the doctrine before trying to explain it to someone else. But they make you teach an investigator only in Espanol on your second day. So Cristina - buckle up. The most important thing is to keep your companions united so you can prepare AND teach lessons by the spirit. It's super hard with three, but it's a process, and we're working on it. But your prayers would really be helpful

- Sam - good work on sharing the Gospel and being Student of the Month! I'd like to hear all about it from you...

- To all Spanish speakers within the sound of my voice. Would you mind sending me your testimonies in Spanish? Not that I want to steal them and don't know my own, but it gets old saying "yo se que..." over and over again.

- Thanks for all the letters (especially from Cristina and Dad), but Ricky's got you all beat - breakfast and hand -written letters. So step it up. jk. But seriously.

- Mom thanks for the letter. It was what I needed to hear. And for the record, you're both funny and hip. I love you.

- What else... Oh funny story. They do scripture engravings for free at the bookstore, so I took in my English and Spanish scriptures, mini himnos, and journal. It took a few days, and when I finally got them back they all said "Hermana Eliza AndreasOn." It's so funny because I wrote it myself three times, then the guy looked at my name tag and wrote it himself again. But I figure it'll just be a funny story one day.

- Okay, well my time's almost up. I'm going to write letters while I do laundry, especially one with advice to Cristina. You'll thank me later. If you want specifics you have to ask questions. What a concept huh? But seriously, thanks for all the letters. There's nothing worse than when the District Leader hands out letters in front of everyone and you don't get any. So keep that in mind.

I love you all, the church is true, and I know that I'm where I'm supposed to be. I'll try to figure out how to send pictures next week, but I don't have a lot so far.